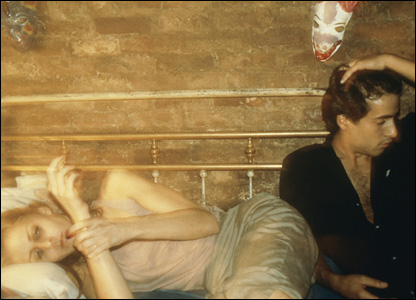 I went today for the second time in the exhibition of Nan Goldin in Kiasma, Helsinki. Very strong, personal, raw and real photography. A good example of a photographer that does not use the camera to lie, but to tell the truth of her life and friend.

Saturday I went to see Control again… so good! After quite some singles the german duo composed by Jens “Jence” Moelle and ?smail “Isi” Tüfekçi released in 2007 their first album, Idealism. The album shifts around different tunes and reaches the top with “Digitalism in Cairo”, with samples of The Cure – “Fire in Cairo” (1979), and “Pogo” that was used in several advertisements.

Very interesting article about the risks and threats of encryption.

“Lot of organizations are new to encryption,” he added. “Their only exposure to it has been with SSL, but that’s just a session. When you shift to data at rest and encrypt your laptop, if you lose the key you trash your data – it’s a self-inflicted denial-of-service attack.”

“El Laberinto del Fauno” is a spanish/mexican production written and directed by the mexican Guillermo del Toro. The story takes place somewhere in Spain, five years after the Civil War. The fight between the rebels and the army is the background of a fantasy story where Ofelia, a young girl very passionate about fairy tales, is the main character. The story keeps the same rhythm through all the movie and the multiple story lines are very well connected without excessive grasping to any story, character or fact. I also enjoyed the “fight” between the innocence of Ofelia and the hate in the real world.